A lot of this site deals with converting modest size commercial panel vans into camper vans, RV’s, and toy haulers. 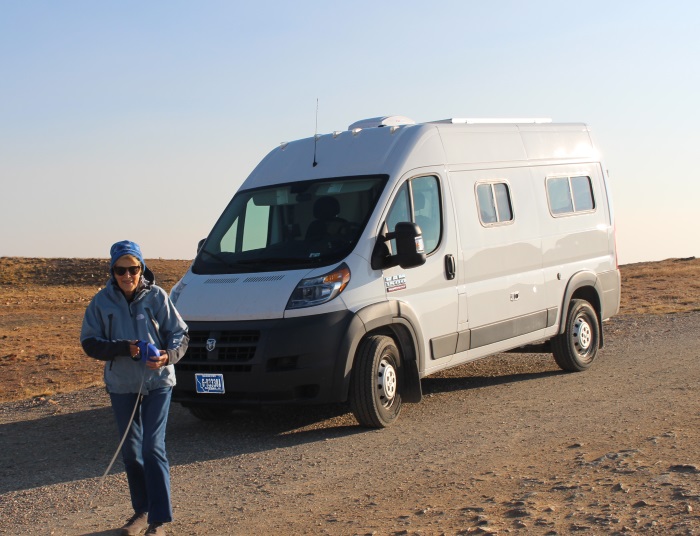 This page puts some details to the advantages of taking this approach.

To me, the small self built camper van approach has a lot of benefits compared to a traditional RV, including…

This section puts some numbers and details to these benefits.

While a lot of the content here is about people who build their own conversion vans, it is also entirely feasible to plan out your ideal layout, and have a commercial conversion outfit do it.  This can even be pretty cost effective in that you may decide you don’t need things like the marble counter tops and noisy generators that inflate the cost of many commercial RV’s.

This table puts some numbers to the cost, fuel efficiency, and emissions differences between various styles of RV’s.

Assumptions for the table…

If you look around online, the mpg numbers for a given RV tend to be all over the map, so I tried to find examples where actual RV owners had kept careful track of mileage over a long period of time.

The Class A fuel numbers are this report on the  for the Fleetwood Bounder.

The Conversion Van fuel numbers are from our ProMaster conversion.

The Small Camper fuel numbers are based on the EPA highway estimate of 30 mpg minus a bit for the high payload and the not quite as aerodynamic “pop top” as the standard roof.

To keep things simple, I used all gasoline powered vehicles.  I know that diesels are more efficient and get better mpg.  A part of the better mpg (about half) is due to the fact that a gallon of diesel has 13% more energy content than a gallon of gasoline (129.5K BTU vs 114.5K BTU), and a part is due to the greater efficiency of the diesel cycle vs the auto cycle.  The larger energy content per gallon of diesel also makes for proportionally greater CO2 emissions (19.64 lbs CO2/gal for gasoline,  22.38 lbs CO2/gal for diesel), so diesels do not help as much on emissions as they do on fuel use.  You could do the table using all diesel versions and the relationships would be about the same.

Its interesting to note that the Class B Travato and our van conversion share the same RAM ProMaster base vehicle.  So, frontal area, power plant, … are the same.  The Travato is  17% longer and 25% heavier than our conversion, and the fuel efficiency of our conversion is 29% better than the Travato – this is a little more than I would expect, and there may be some difference in driving speed and style, but it does tend to show what you can accomplish with some minimization and attention to weight.

The table gives an idea of the improvement in fuel economy you get as you go down in size — from 7 mpg for the 34 ft class A up to 20 mpg for our DIY van conversion, and 28 mpg for the small camper.  Over the life of the vehicle this is can be a $60,000+ saving just in fuel!

Other operating costs are also going to be less for the smaller van conversion vehicles.

The CO2 emissions are directly dependent on how much fuel  you burn — every gallon of gas is 19.64 lbs of CO2 into the atmosphere.  From lifetime emissions of over 200 tons for the Class A to 74 tons for our DIY Van Conversion and an even lower 49 tons for the small van camper.

The Van Conversion example uses the RAM ProMaster 136 inch wheel base model as the base van. Its 18 ft long, which is about the same as medium size SUV and shorter than many pickups.  It fits in well in the infrastructure made for cars (at least in the US).  It parks in regular parking spots (parallel or pull in).  Does u-turns in regular streets.  Goes around corners easily.  You can pretty much drive it just like a car.  Just don’t try to pull into parking garages with low roofs designed for cars — that would would leave a mark.

If you are on the road and coming into a town you would like to stop at and look around, you don’t have to think “where am I going to park my big ‘ol motorhome”, you can just go for a regular parking spot.

It will also fit into tight camp grounds and tight camp spots easily.

The Class B example is 21 ft long, so a bit more of a challenge on the road system, but still able to do pretty well.

The Van Conversion type campers do well on most back roads.  They generally have good ground clearance, maneuver well, and are not too wide.  Sort of like driving a 2WD pickup truck on back roads.  Not for heavy duty jeep trails, but fine for most back roads.

If you like to do this kind of driving (as we do), its no problem — just be sure that the conversion is done in such a way that things in the back are secured in place.  Its good to retain the full size spare for this kind of driving — even if you have to mount it on the back door to make more room underneath for tanks.

Doing a van conversion yourself gives you the freedom to choose any layout you want and to design it carry whatever you want to carry.

All you have to do is look at some of the builds on the ProMaster, Transit, and Sprinter forums to get an idea how many different kinds of uses these vans have been converted to.

If you want something that can be an RV, but can also haul bicycles, show dogs, motorcycles, wind surfing stuff, … you name it — then a converted van might be the way to go.

It is also entirely feasible to plan out your ideal layout, and have a commercial conversion outfit do it.  This can even be pretty cost effective in that you may decide you don’t need things like marble counter tops or noisy generators that inflate the cost of many commercial RV’s.  If you want to look into this approach, I’d start by taking a look at the SportsMobile site — there are many outfits out there that do conversions, but the Sportsmobile site lays out the options well.  An example: Steves’s custom converted van on the PM forum.

The Van Conversion size camper makes a pretty acceptable 2nd car that can be used for picking up some sheets of plywood, the kids, or even commuting to work.  You can even plan the conversion to make it easy to use the van as both a camper van and  a general purpose hauler of big bulky stuff.

The obvious thing that you give up in going from a large class A style RV to a converted van style RV is living space.  A moderate size class A might have about 200 sq ft while mid sized converted van is more like 100 sqft, and a small converted van might be more like 60 sqft.  So, it tends to come down to can I live comfortably in this smaller space in order to gain all the other advantages?  Clearly many people have decided that they can, but its a decision you and your family have to make.  I’d suggest spending a lot of time looking at actual RV’s and trying to carefully visualize life on a smaller scale — you may find that you really like small.

What Does Fuel Efficiency Depend On?