This section covers our homemade composting toilet for our ProMaster camper van conversion.

The DIY composting toilet is located up front just behind the passenger seat and next to the sliding door. It also provides some map etc storage and an extra place to sit.

The toilet design includes urine separation and includes a small vent fan that runs all the time to keep odors down and maintain an aerobic composting process. 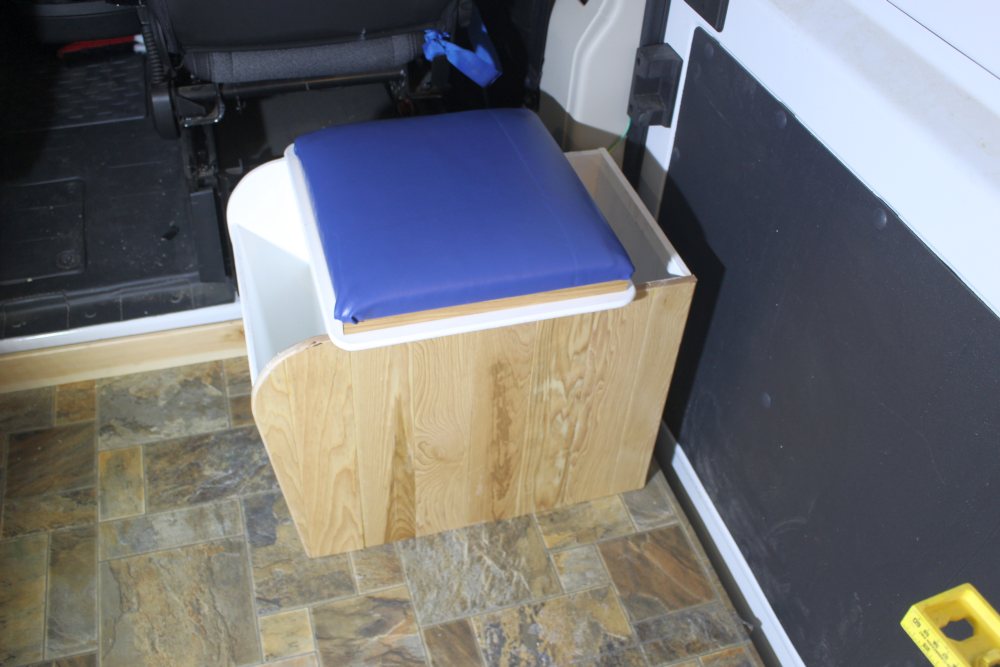 The finished toilet installed behind the van passenger seat. The blue cushion comes off to reveal the toilet seat.

You start by adding some peat moss to the bucket — this provides Carbon for composting and provides more air in the mix.

When you use the toilet, the urine is diverted into the pee bottle, and poo drops down into the bucket. After each poo, you add a bit more peat moss to the bucket.

The pee bottle is dumped as necessary throughout the trip. How often will depend on the size of your pee bottle and how often you use it vs other facilities. An adult is said to generate about 1 liter of urine per day.

The mix in the poo bucket will compost some over the course of the trip. When you get back home, you can dig a hole in the yard for it to finish composting in, or you can place it in a plastic bag and put it in the garbage. The volume is said to be much less than you would expect as the composting process reduces volume.

The compartment on the inboard side provides some storage for maps, books, etc. that is accessible to driver or passenger while driving. 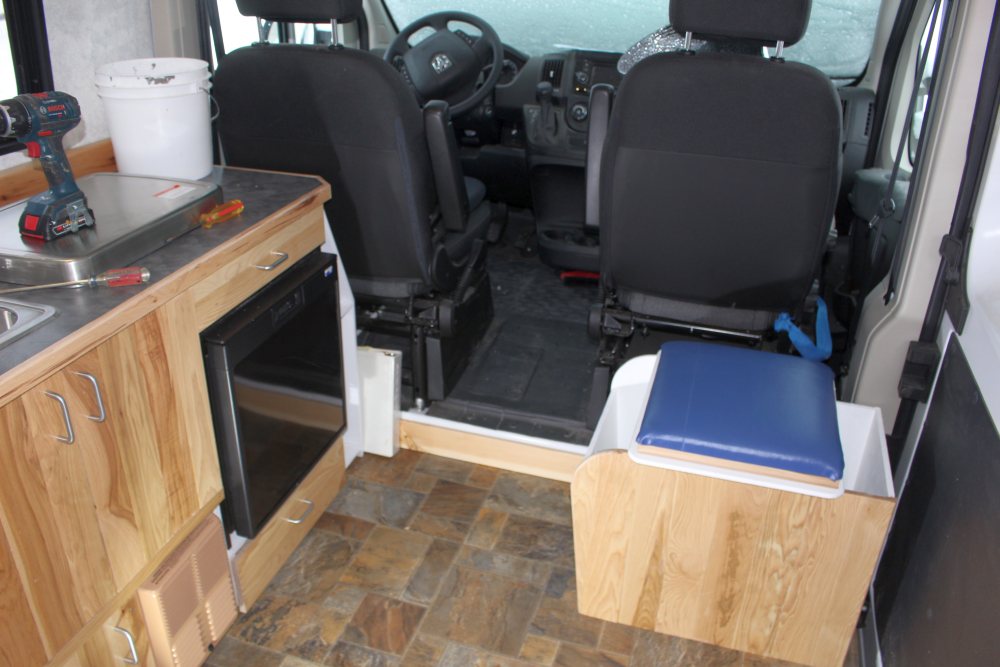 The toilet has a removable seat cushion that seals the top and serves as an extra place to sit.

The compartment on outboard side stores toilet paper and peat moss/sawdust.

The urine diverter diverts urine into the pee bottle in the base of the toilet — this makes for better composting conditions in the poo bucket, slower filling of poo bucket, and less possibility of odor. The diverter works for both males and females as long as everyone sits down to pee.

I know near nothing about how composting toilets work, and was skeptical that they would be a good solution for an RV. The references below from people with lots of experience with composting toilets in RVs convinced me that it is a solution worth trying.

They advantages the composting toilet offers over the usual RV approach:

These are some of the references that convinced me to give this a try:

I want to thank Gordon and Sue for submitting all the details on building and using their composting toilet in their RV over the years — this is what got us off the fence on trying the composting toilet.

Another option found by Dennis is this Kildwick composting toilet kit.

It appears to be a high quality kit with all the essential components.

See Dennis description and pictures in the Comments section below.

We wanted the toilet to be as compact as possible in that its located in an area with limited space. In order to get the size down as small as possible and to make sure that it would fit in the intended area OK, I built a full size mockup — this allowed playing with the relative locations of the bucket, pee bottle, toilet seat, and urine diverter to get a compact arrangement. It also allowed actual testing of the urine diverter. 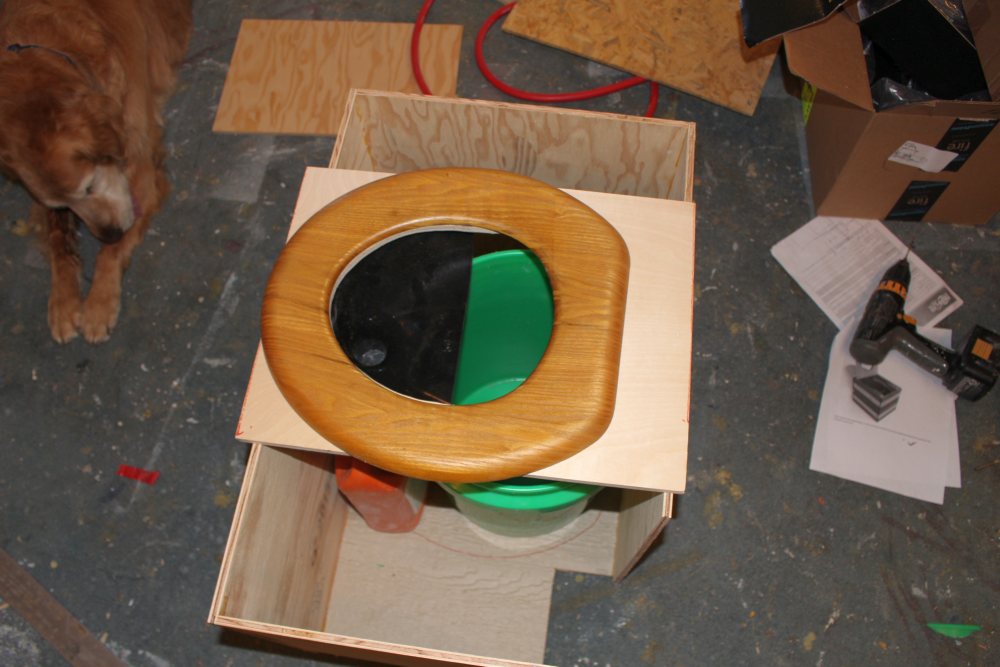 Simple mockup helped to get the geometry right.

The toilet seat is a standard one off the Home Depot shelf. They sell ones with round openings and with oval openings — this one is a round opening which uses less space and seems to fit the urine diverter better. 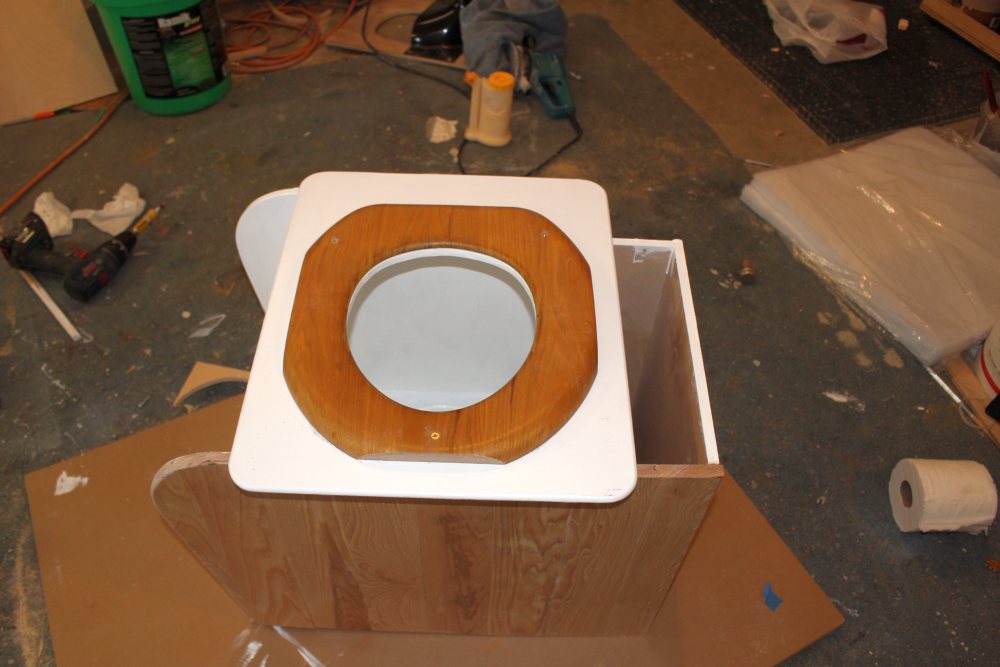 The lid that came with the toilet seat was removed, and the bumpers on the bottom of the seat part are removed so that the toilet seat can be sealed right down to the lid of the toilet box. It is important to not leave any openings for insects to get in.

The board the toilet seat is mounted on is hinged at the back to allow access to the poo bucket and pee bottle.

The box closes in the bucket, bottle and vent fan, provides for storage for peat moss and toilet paper, and provides an enclosure for the airflow created by the vent fan.

The box is 17 inches front to back, 23 inches wide (including storage areas), and 18 inches tall. We tried to make these as small as possible because the space we have is limited. If you have more space, I’d consider allowing for a bigger bucket and particularly a larger urine container.

This is the basic box. The center part holds the poo bucket and pee bottle, the right compartment is storage for peat moss and toilet paper, and the left part is a stowage bin for maps etc that is reachable from the drivers or passenger seat (I suppose it could also be toilet reading material 🙂 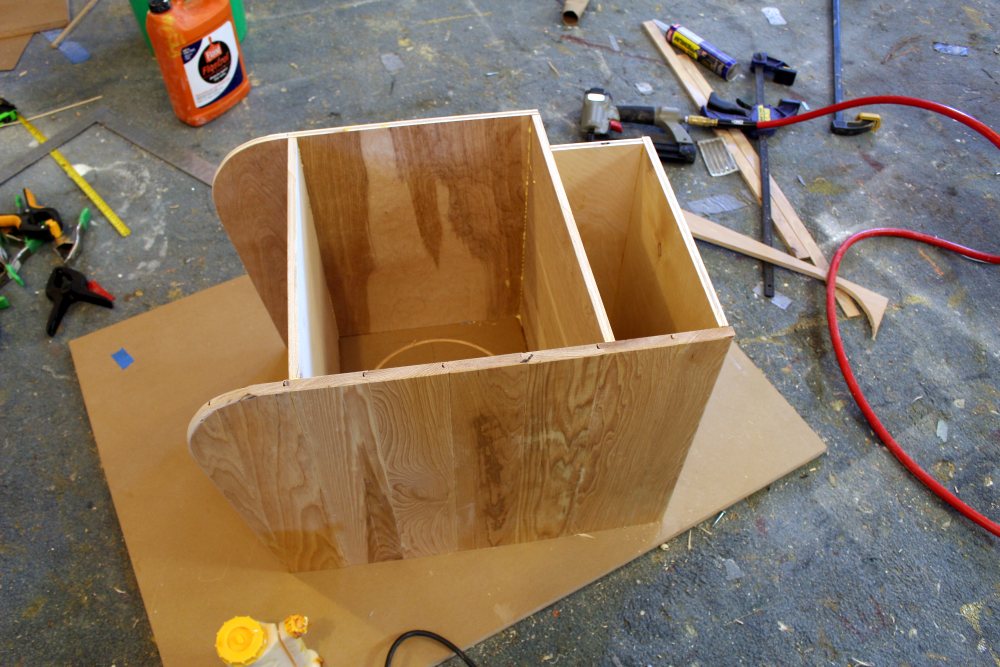 The base of the box is made from some 3/4 inch Medium Density Overlay (MDO) plywood I had left over. 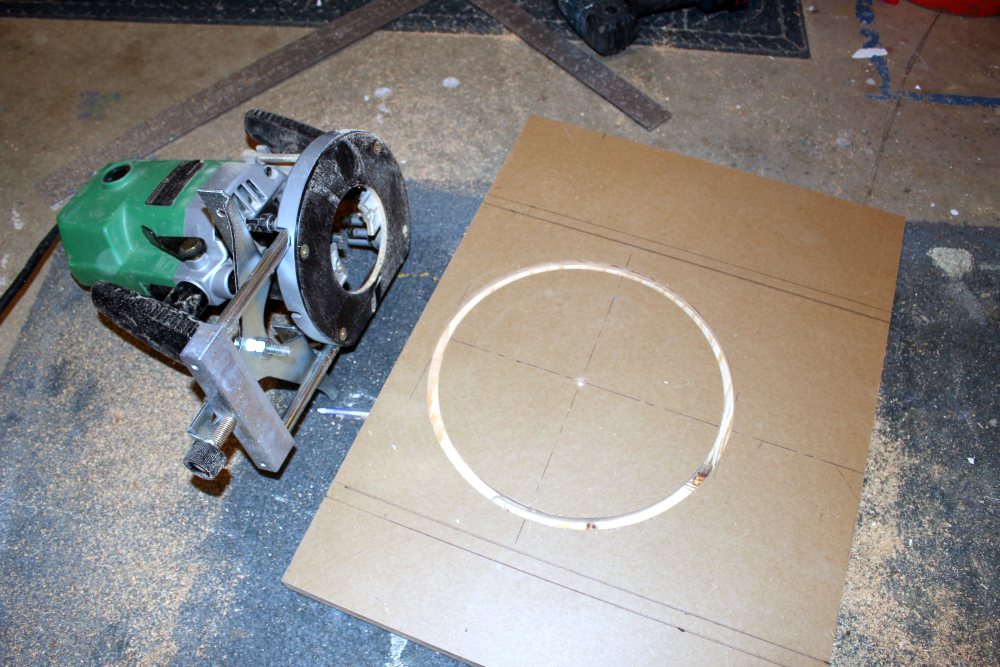 I routed a groove in the base for the bottom of the bucket to fit into.

The back and sides of the box are made from some left over half inch birch plywood.

Some pictures showing how the poo bucket and pee bottle fit in the box.

The little funnel channels the urine from the urine diverter into the pee bottle. I was going to use a piece of tubing, but ran across the funnel lying around, and it seems to do the job. The vertical stack up of pee bottle, funnel, and urine diverter is near perfect.

Based on the references, I wanted to be sure to include continuous low flow volume ventilation of the toilet box with the vent flow exhausted to the outside. This helps to keep an aerobic composting process going and helps to avoid the more smelly anaerobic process — it also carries away any potential odors.

The fan for the venting should be low volume, low power, and low noise as it runs all the time. I had a few 12 volt fans on hand and tried them out to pick the quietest one. The selected fan is about 2 inches on a side, and uses 75 ma, or about 0.9 watt — this is about 1.8 amp-hours a day out of the 200 amp-hour house battery.

The jury is still out on whether the fan is quiet enough — if not will have to buy a quieter one.  Update: the noise level is fine – you can’t hear it unless you put your ear right next to the toilet.

The fan is on its own fuse, and since the wires going to it are small gauge, I’ll use a small fuse.

Also included an on/off switch near the fan so that if the toilet was not in use for a long period the fan could be turned off.

The vent fan is siliconed to the top of a 2 inch PVC coupling, which it fits nicely. I did not want to drill a 2+ inch hole through the floor, so I used a reducing bushing to cut the size down to 3/4 inch PVC (which fits through a hole slightly over 1 inch in diameter). I ran the 3/4 inch PVC through the floor and siliconed it all in place. I’m not sure if reducing the diameter down to 3/4 inch will reduce the flow too much, but it still seems pretty good — will make the hole larger if need be.

We have not used the toilet yet — plan to soon.

Even though there were some good examples out there to model the design after, I’m still in doubt about a few things:

Update after first trip: A couple things learned from the first trip: 1) the pee bottle I used is too small — it should probably be more like a gallon, 2) the toilet cushion gets used a lot as an extra seat — its in a handy place for sitting.

2nd Update September 2016: We have now used the toilet on many trips and it has worked well.  One thing we did find is that the half gallon pee bottle is too small.  After a bit of hunting around, I found a 1 gallon jug that would fit in the same place with only minor rework and that has worked out fine.  The new jug is a bit taller and I ended up siliconing a cut off funnel into the urine diverter outlet — the funnel outlet is small enough to fit directly into the pee jug opening.

I do want to point out that we don’t tend to use the poo function on the toilet a lot.  We are usually in National Forest campgrounds or the like and we use the toilets there for pooing.  I think that most people do the same.  But, if you want to be away from conventional toilets for extended periods, I don’t see any reason why this design would not work fine — this is based on other writeups I’ve seen on similar composting toilets used in boats and cabins as the only toilet.

On the last couple trips, I’ve taken to putting a Costco kitchen size plastic bag into the empty poo bucket, and then add sawdust to the bag.  At then end of trip, I just take the bag out and put it in the garbage — since most of the moisture has been dried out of the poo, its light as a feather.  I also take along an extra bag just in case the first one fills up during the trip, but we have not come even remotely close to this even on trips that last a couple weeks.

Having owned RV’s in the past with a black water tank toilet and also with the porta potty solution, I’d never go back to one of those — the composting toilet with urine diverter is just better all around.

Third Update – Jan 2021:
So, we have been using this homemade composting toilet for 6+ years, and I’ve come to think its one of the very best decisions we made on our conversion.  I think it suits our needs better than a cassette toilet would, and even better than a Natures Head composting toilet (because its so easy to empty).

We started with a half gallon pee container and this was too small, so we changed to a 1 gallon — this is just about right for us.

I would do this homemade composting toilet again on a future van conversion in a heartbeat!

This took a fair bit of time as I built a prototype first to get the geometry right, and then

The urine diverter was ridiculously expensive for a simple piece of molded plastic, but I could not find anything cheaper.

Update: April 2017 — Here is another urine diverter.  Its just as expensive, but it does have a classier look 🙂

The 37 lbs is the actual weight of the finished toilet.