In order to build your electrical system, you will need to know things like: what size battery do I need? What size alternator? How large should the wire be? What size fuses should I use?  etc.   This page provides some simple help on sizing the electrical system components.

Estimating Energy Use and Battery Size

To estimate how large a capacity your house battery should have, you need to take into account: 1) what your electrical loads are, 2) how long you want to be able to go without recharging the batteries, 3) what limit you want to set on how deeply you discharge the batteries.

Estimating your electrical loads: Work out what electrical devices you want to run in the van and how much time you think you will use them each day.  You will also need to know roughly how much power each device uses.  The spreadsheet below has data for the common loads.

How deeply will you allow the batteries to be discharged?  Lead acid batteries last longer if they are not routinely deeply discharged.  A battery discharged only down to 20% might last 3000 cycles, while if discharged down to 80%, it will only last about 750 cycles.  50% maximum depth of discharge is a level that is recommended quite a bit for long battery life.  These numbers will vary some with battery type and brand, but you get the general idea.

Update 2018: It turns out that even while sizing for 80% depth of discharge, in practice we rarely go below 20% depth of discharge.  I think the reasons are that 1) you tend to be a bit conservative when estimating how much power you will use and 2) we drive on most days so, its very rare that the house battery has to go more than one day without charging, and 3) the solar is always charge the battery if there is sun.

To help with determining battery size, I’ve put together a spreadsheet you can download and just fill in the inputs for your situation and get a battery size estimate.  It takes into account the three factors listed just above.

If you don’t want to use the spreadsheet, there are some rough rules of thumb for battery size listed at the end of this section.

Here is a picture of the spreadsheet:

You can use the spreadsheet to see what the effect of adding or removing specific electrical loads make on the battery size.  Some loads like an electric fridge, or a microwave are fairly large and can make the battery size, weight and cost go up quickly.

If you want to add loads not already listed in the spreadsheet, for DC loads you need to know how much amperage they draw (often listed on the device or in the specs), and if its a device that like a fridge that runs only enough to keep a target temperature you have to measure or estimate its duty cycle (the fraction of time it will typically be on).  For AC devices, instead of amperage, you enter the power the device uses in watts — usually listed on the device.

Its interesting to look at different approaches.  For example, using an ice box for cooling rather than an electric fridge not only saves money on the fridge, but also lets you use a smaller, lighter and cheaper battery.  If you plan to add solar charging you can also use a smaller PV panel.

Some loads are seasonal, so its good to run both a summer and winter case.  The summer case will likely include lots of fan use, but little furnace use, and winter will be vice-versa.  You want to use the one that gives the largest battery.  Likewise, different types of trips may result in different battery sizes.

If you and spreadsheets are not getting along, here are some rules of thumb for picking a rough battery size:

Simple RV conversion with only these electrical loads:

LED lights, water pump, phone & tablet charging, some use of laptop and TV, some use of a powered vent fan (eg a Fantastic Fan for 3 hrs).

All of the above are for 1 day of service without charging.

The battery sizes listed above are about as low as you want to go — adding some more capacity if you have the room and budget is good.

We recorded our actual electricity use for one trip — details here…

You will have to choose the type of battery to buy.  You always want to use a deep cycle battery — regular car batteries (not deep cycle) will simply not hold up to frequent deep discharges.  Among the deep cycle batteries you will have to chose between a traditional Flooded Lead Acid (FLA) battery and an Absorbed Glass Mat (AGM) battery.  While both can be good, this is a decision that depends on a number of factors — this page goes over the pros and cons of each…

There are a lot of ways to kill a battery long before it wears out from the number of discharges — you can chronically over charge it, chronically under charge it, not water it, freeze it, …    If you can actually keep your batteries alive until they die from too many cycles, you are a much better than average battery maintainer.

To be added soon…

Most camper vans include a battery charger that can charge the battery when you are hooked up to shore power.  For regular flooded lead acid batteries, most of the manufacturers recommend a charging current about equal to 10% of the 20 hour amp-hr rating of the battery.  So, as an example, our van uses two 6 volt batteries in series, each rated at 220 amp-hrs — so, a charger providing (0.1)(220AH) = 22 amps charging current is about right.  Smaller is probably OK, it just takes longer to charge the battery. A bit larger is probably also OK as well, but excessive charging currents result in more gassing and shorter battery life.

It is best to contact the manufacturer of your battery to get their recommendation on maximum charging current.

The inverter supplies power to run 120 VAC to things that require regular household power.  It should have a rated output at least as large as all of the AC power devices you plan to run at the same time.  Most loads have a startup surge that is larger than their nominal power rating, and most inverters have a start up surge rating that can handle this, but some loads with heavy startup surges may require going to an inverter with a higher power rating than the nominal rating of the load.

One thing to note is that microwaves are rated at output power, so a 1000 watt microwave actually draws more like 1200 watts.

Most people find that its better to run things that can either be run on 120 VAC or 12 VDC to run on the 12 VDC.  The advantage of running on 12 VDC is that the inverter does not have to be turned on as much (it draws power even when there is no load on it), and you eliminate the inefficiency of the inverter, and, if the inverter has a cooling fan, you don’t have to listen to it as much.

For most camper van conversions, most of the loads are 12 volts.  This includes things like the LED lights, water pumps, charging phones and laptops, etc.  This can make for a lot of 12 volt circuits, so try to  use a DC distribution panel with room for more circuits that you think you will need.

In addition to choosing a wire with a high enough maximum current carrying capacity, you also need to check that the voltage drop on the circuit is not to high — this gets to be more of a problem as the wire runs get longer.  You should keep the voltage drop to 2% or less.    The calculator below is probably the easiest way to get to the right wire size.

In some cases, 12 volt circuits that power large loads will require heavy gauge wires.  For example, a 1000 watt inverter will draw about (1000 watts/12 volts) /  (0.9) = 93 amps (the 0.9 is the inverter efficiency) in the wires from the house battery to the inverter.  This would require at least #6 wire, and if the run is longer than 3 ft, it would require a larger gauge to avoid going over 2% voltage drop.

BlueSea (a seller of electrical supplies for boats) has a good wire sizing calculator that takes into account both the ampacity of the wire and voltage drop.  The calculator is intended for sizing wires for boats, which seems like a good fit for RVs. Its called the Circuit Wizard and it looks like this: 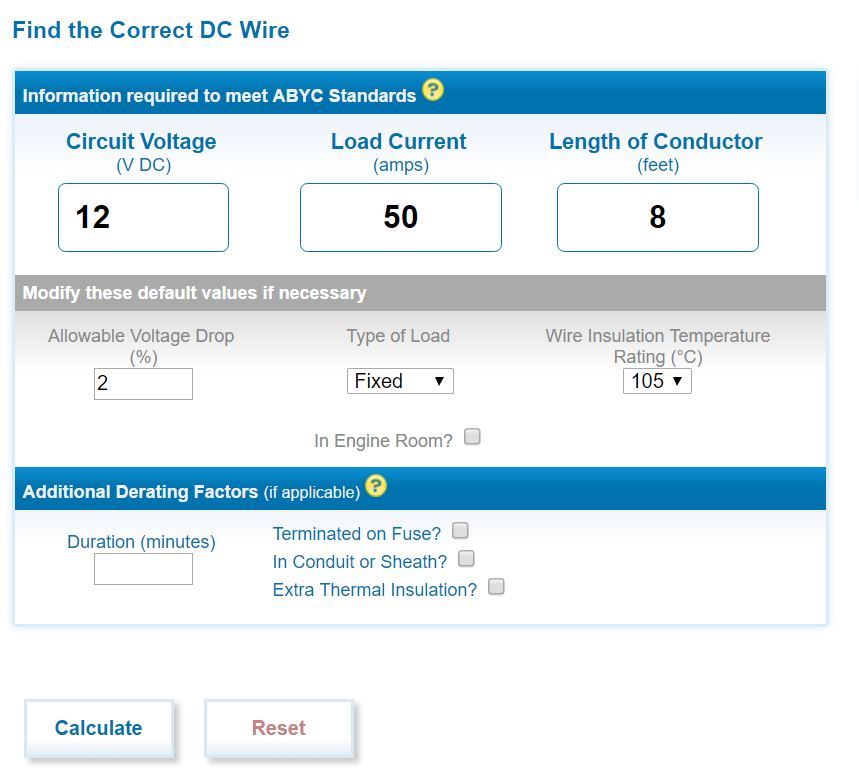 The current should be the maximum you expect the circuit to draw.

The length you enter is the total length of the supply plus the return wire.  That is, if the positive wire going to the load is 2 ft and the negative wire coming back is also 2ft, then enter 4 ft.

The calculator is available for the PC and also as an app for Android and IOS smart phones.

The fuses on 12 volt circuits are there to protect the wiring, so they should be no larger than the ampacity rating of the wire used on the circuit.  The fuse or breaker should placed as close to the power source (battery) as possible.

Loads that are continuous need special attention.  As a rough guide:  for continuous loads (30 minutes or more) bump up the load current by 25% when selecting wire size, but use a fuse/breaker rated for the nominal load size.

Don’t bury wires inside insulation as it will cause them to overheat.

Circuit breakers or fuses should be placed as close to the current source (battery) as possible.  If a short to ground occurs in the wire between the battery and the fuse, the fuse does not provide any protection because it does not see the short circuit current.

Maximum current for wire gages…
From BlueSea and based on ABYC standards.

Combined current and voltage drop wire sizing table…
From BlueSea and based on ABYC standards.

The ABYC is the American Boat and Yacht Council — they publish safety standards that are widely used in boat design.

The battery isolator is a relay that only connects the van battery to the house battery when the engine is running.  It keeps electrical loads from the furnace etc. from discharging the van battery overnight and leaving you with no juice to start the van in the morning.  A VSR (Voltage Sensing Relay) is similar to a battery isolator, but just uses the alternator voltage to determine when to close and charge the house battery.

Gas generators are just about universally disliked in campgrounds because of the noise and fumes, so if you can possibly work out a way to not require a gasoline generator, that would be great — your neighbors will be grateful.

About the only load large enough to require a gas generator on a van conversion is an air conditioner.